In this sequel to Shadow and Bone, Alina and Mal are being hunted by the Darkling, who has escaped the Shadow Fold with an even darker power. Alina joins forces with a notorious pirate and returns to face the Darkling and rally the Grisha against him. But as her power grows, she grows further away from Mal, and risks losing everything.

I read this book in one sitting. It was that good. I thought the first book gave me feels, but this one had even more! So many unexpected turns and trials and terrible brushes with the Darkling. And Sturmhond, the notorious pirate, is possible the most fabulous character ever. I was in love with him the second we met.

However, in case anyone is curious, I am Team Mal all the way and was heartbroken every time they grew further apart.

I loved that this book had a powerful, yet flawed female protagonist. Alina is not even close to perfect, but she still stands for what she believes in, and fights to save her country at great risk to herself.

If you haven’t started reading this series yet, DO IT. And if you’ve already read these, check out these great additional stories Leigh wrote:


http://www.macteenbooks.com/Facebook/shadowandbone/tailor.html
Posted by Emily Ritter at 11:00 AM No comments:

Aliens appear in the sky one day, and in a series of four waves, humans are almost completely wiped out. In the dawn of the 5th wave, Cassie tries to stay alive to rescue her brother, who was taken by The Others, disguised as humans. She knows she can trust no one, and the first rule of survival is to stay alone. But then she meets Evan Walker, who may be her only chance to save her brother, and rescue herself. But can she trust him?

This book had a LOT of hype. I was worried I would be disappointed. But this book actually lived up to the hype!

Normally, post-apocalyptic alien stories are not my thing. They tend to get really violent, and really bleak, really fast. But Cassie’s honest and clear voice kept me reading until I was too hooked to be frightened off by a few human-shaped aliens. The history of the invasion is woven into the story, so that you discover each horror as you become more and more attached to the characters and story. The narrator jumping, while confusing at first, was yet another successful way of drawing me into the story.

I yelled at this book a lot. Mostly, NO NO NO NO DON’T DO THAT WHY ARE YOU DOING THAT, which shows you how invested I became in Cassie, and co surviving. Part thriller, part mystery, part love story, this book will grip you and not let you escape, even when the aliens finally reveal themselves. I barely escaped the 5th wave and I loved it.
Posted by Emily Ritter at 3:00 PM No comments:

Sixteen year old Ruby breaks out of a government-run rehab camp for kids who developed dangerous powers after a virus took out most children in the United States and threw the country into a panic. Ruby joins up with another group of escaped kids as they search for a legendary safe haven, called East River, for kids like them. But everyone, from the people searching for Ruby, to the teens at East River, has their own agenda, and Ruby is hiding her own dangerous secrets.

Want to know how great this book is? Story time! I was home for Memorial Day weekend, and requested this book from the library, in the off-chance that I would have time to read it. I started it, and didn’t want to put it down (but come on, it’s Memorial Day weekend and there’s no time for reading). Then it was time to leave, and so I took it with me, on the plane to New York, so that I didn’t actually have to put it down. I went to the bookstore in NYC the next day and bought a copy. (And then, yes, I had to ship the library book back to Kansas!)

Why couldn’t I put this book down, you ask? You can’t help but root for the characters, who have known nothing but brutality in the camps since they were children, but who still have some sort of belief that the world isn’t one giant terrible place. Ruby joins up with Liam, Chubs, and Suzume, and together, they become a family that believes in each other, and encourages each other to use their “dangerous powers” for good (and to escape the bad guys, because they’re constantly in danger).

The powers themselves were really interesting (who didn’t want to have a super power growing up?). These kids have real power in their hands—controlling minds, fire, electricity, and more—and some use it for good, and some for evil. This book was great at pointing out the grey areas of good and evil, and how hard it is to navigate that.

With awesome world building, characters, and twisting story full of impossible choices, this is one book you shouldn’t miss.
Posted by Emily Ritter at 11:00 AM No comments:

Set over the course of one school year in 1986, this is the story of two star-crossed misfits who fight bullies, rejection, and countless other obstacles in their desperate battle for a love that lasts.

This book is beautiful. And tragic. It’s Perks of Being a Wallflower meets Romeo and Juliet with a classic 1980s soundtrack. It will make your heart ache. You will cry. But you will also want more than anything for the love these two 16 year olds have for each other to survive.

Tragic beauty usually isn’t my thing, but what I loved most about this book is how real the relationship between these two was. It takes them forever just to hold hands, and there is magic in the hand-holding. In so many YA books, it’s easy to forget the characters are so young, but in Eleanor and Park, you really feel like these characters are that young (and you remember how you felt at that age.)

This book is worth the hype, and worth the read. Bring tissues.
Posted by Emily Ritter at 10:00 AM 4 comments:

Email ThisBlogThis!Share to TwitterShare to FacebookShare to Pinterest
Labels: 1980s, Eleanor & Park, Rainbow Rowell, Romeo and Juliet, star-crossed lovers, The Perks of Being a Wallflower, tragedy

Rory Miller barely escapes an attack by a vicious serial killer, and when he eludes capture, Rory and her family are sent into witness protection. Their new home is Juniper Landing, a picturesque vacation town far too quaint and peaceful for a killer. But Rory can’t shake the feeling that she’s been followed, especially when weird things start to happen on the island.

I love this cover!

I am normally far too chicken to read horror/thriller books, but Kate Brian is one of my favorite authors, and after meeting her at an author event, I decided to give this book a try.

What a ride! I read most of this on the subway, and it was such a crazy feeling to be reading about a creepy murderer, surrounded by people going about their daily lives. Thankfully, those people made me feel a little safer, because this book is scary! Rory’s killer just keeps coming for her, and the creepiest bits were the short chapters peppered throughout that were told from his perspective.

Rory was a great narrator the rest of the novel. I was terrified with her, but also rooting for her when she decided not to let the terror run her life, and to live every day, not just to exist. And finally, WHAT AN ENDING! I cannot wait for the next book in this trilogy! 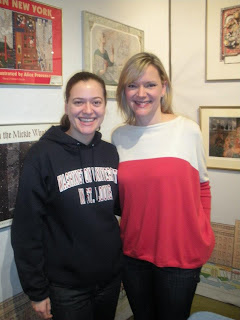 Here's Kate Brian and me at the book signing.