If He Had Been With Me (Laura Nowlin)

Title: if he had been with me
Author: Laura Nowlin
Publisher: Sourcebooks Fire
Length: 328
Rating: 2.5/5

Autumn and Finny have been inseparable since birth, but have grown apart during middle school and rarely speak in high school. After a terrible accident, Autumn reflects on her relationship with Finny, and how everything could have been different.

While I loved the middle of this book, I hated the beginning and the end. Why ruin such a great love story? Why do you have to make it Romeo and Juliet? Yes, one of the major themes is tragedy, but I don’t fully agree with Autumn that tragedy can be beautiful. (There was so much ranting after I finished this book- I would have flung it across the room if it hadn’t been 2am).

I disliked these parts so much because there was so much good in the book, and I felt it had been wasted. The book is set in St. Louis, one of my favorite places (and a rare setting for a YA book). It’s a terrific coming-of-age story that I couldn’t put down. Autumn was quirky and funny, and wore a tiara, because she wanted to. And Finny is the ultimate boy-next-door who you can’t help but love.

But on the other side, tragedy looms everywhere, teen pregnancy is rampart, and I was left way too disgruntled. In my opinion, this book was trying too hard to be great, and it got in the way of actually being great.
Posted by Emily Ritter at 11:00 AM No comments:

Email ThisBlogThis!Share to TwitterShare to FacebookShare to Pinterest
Labels: boy next door, coming of age, If He Had Been With Me, Laura Nowlin, Romeo and Juliet, St. Louis, teen pregnancy, tragedy

Kami is best friends with the imaginary voice in her head. His name is Jared, and when he turns out to be real, the sleepy town of Sorry-in-the-Vale gets quite the wake-up. Because their connection isn’t the only magic that’s been awakened when the Lynburns return to town.

This book was great, but in such a messy way that I couldn’t fully enjoy it. Let’s start with the great. Kami is awesome and quirky, and can take care of herself. She’s not even close to being a helpless heroine. Many of the other characters are quirky, weird, and awesome in their own way too. I was a huge fan of Kami’s best girl friend, Angela, whose main traits include beauty and laziness. The dialogue between characters is quick and funny, and you want to be friends with these people. Plus, the idea of being able to speak to someone else in your mind has always fascinated me, and I loved the way it was brought to the page.

But there were so many things that confused me and kept me from being swept into the story. Maybe this is because I read this book in ARC form (although it seems unlikely) but there were never page breaks when switching scenes or narrators, and it was a headache to keep up. I also didn’t fully understand the motives of the characters, especially Kami and Jared, when they fought both to be together and to be apart. Both of these characters were all over the place, literally and figuratively.

While I was not pleased with the cliff-hanger ending, it did make me want to read more. Maybe things get neatened up in future books?
Posted by Emily Ritter at 12:01 PM No comments:

Blue has always been told that she will cause her true love to die. Her general rule is to stay away from boys, so she doesn’t find this premonition a problem until she meets Gansey on the Corpse Road on St. Marks Eve, the night that spirits of the soon-to-be-dead show themselves to the clairvoyant members of Blue’s eccentric family. Gansey is a Raven Boy from the rich boarding school down the way and all Blue knows about his is that he will die in the next year, and she may be the cause. Blue’s rule to avoid boys is soon abandoned and she is drawn into Gansey’s world, filled with his friends Ronan, Adam, and Noah and their obsessive search for a specific kind of supernatural.

1.      I love Maggie Stiefvater. I had the pleasure of meeting her last year, and she’s awesome. If that’s not enough to convince you, she also plays the bagpipes.
2.      This book was intoxicating and addicting and gave me all the FEELS.
3.      BROMANCE. Finally, because I needed some good YA bromance. I adored all of the Raven Boys- their quirky ways and heart-breaking faults, and they way they supported each other no matter what. Blue isn’t used to having boys in her life, but she fits right in with the boys, and despite all unhappy predictions about true love, this isn’t just an unhappy love story.
4.      Welsh lore and supernatural elements were perfectly interlaced in an everyday world.
5.      This is one of those “so good you have to go out and buy it ASAP” books.
6.      I need the sequel. Like, now.
7.      I obviously loved this book and you should definitely give it a try!
Posted by Emily Ritter at 11:58 AM 4 comments:

WIN an ARC of Gorgeous 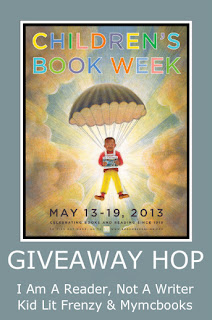 Welcome to this stop on the Children's Book Week Giveaway Hop where you can win an ARC of Gorgeous by Paul Rudnick.

When Becky Randle’s mother dies on her eighteenth birthday, she is devastated. But in her mother’s things she discovers a phone number that changes everything. Tom Kelly, the world’s top designer, offers to make Becky three dresses, guaranteed to turn her from trailer park girl to world’s most beautiful woman. Remade as Rebecca, she flawless in everyone’s eyes except her own. But it’s Becky, not Rebecca that falls in love with the prince of England, and Becky isn’t sure Tom Kelly’s magic is enough to make the prince see the read girl inside the beauty.

This book was a fun and snarky, with something important to say about popular culture and how we see beauty. Also, the cover is, well…gorgeous!

I liked the conception of the fairy-tale magic of this book. Becky is only Rebecca when she’s with other people. Alone, she looks in the mirror and sees her normal self. There’s no makeover and the magic is really in perception. This makes the book more relatable, because everyone sees themselves differently than other people see them.

Becky’s story goes to all extremes. She stars in a movie with Hollywood it-boy Jate Mallow, is on the cover of Vogue, and of course, dates the prince of England. My favorite part about all these crazy adventures is that she brings her best friend Rocher (named after the chocolate of course) along with her. Rocher keeps Becky sane, and keeps the reader sane with her witty voice of reason through all the crazy adventures.

This book is unlike any other YA book I’ve read. While at times a bit long-winded in its lavish descriptions of the culture, this book will make you reevaluate the power beauty, both inside and out.

Sound like the perfect fit for you? Enter to win below (US and Canada entries only please):


Find more giveaways on the hop HERE.
Posted by Emily Ritter at 12:00 AM 17 comments:

Fia does everything they tell her to, because if she doesn’t, they’ll kill her sister Annie, and probably her as well. Fia is the ruthless hands—killing, stealing, deceiving—of an organization that uses women with special brain powers to their own secretive ends. Both sisters are being used, and both are tired of it. Because they’ll do anything to protect each other, will they ever escape?

First of all, thanks to Epic Reads for the chance to win an ARC of this book. If you’re not following Epic Read’s Ustream of #TeaTime every Wednesday, you should start now!

I couldn’t put this psychological thriller down! It was like that time sophomore year of college where I watched the entire series of Alias. Fia was like an early, angrier Sydney Bristow, and I loved her for it. It takes a certain amount of authorial skill for me to love angry, messed up characters, and Kiersten White gets it just right. Both Annie and Fia have done some awful things, but you like them, despite it all.

Another thing I loved about this book was the power that women held. Yeah, many of them were being ruthlessly used by a male-dominated evil corporation, but the real power (as Fia proves) lies with the women. Here, natural “womanly” traits, such as the ability to feel emotion and to trust instincts and intuition are actual brain powers.

And instead of the typical YA male-female relationship driving the plot, it’s the relationship between sisters that drives everything Annie and Fia do. Of course there are boys (good-looking boys) along the way, but everything comes down to the powerful bond between sisters, something which anyone with a sibling can get behind.

If you like a good mystery/thriller, this book is for you.

Watch author Kiersten White tell you about her favorite Kick Butt Girls! Here's one of my favorites, Shannon Hale: http://www.epicreads.com/blog/kick-butt-girls-with-kiersten-white-5-shannon-hale/

And more! Including Sydney Bristow! And Veronica Mars! http://www.epicreads.com/blog/tag/kick-butt-girls/

While searching for his lost brother, Rownie escapes Graba the witch’s household and takes up with a troupe of goblin actors. Danger follows Rownie everywhere as Graba tries to get him back, and the Guard of the city of Zombay search for human actors. Because in Zombay, it is illegal for anyone but Goblins to act, for masks and those who wear them hold a certain power. What magic has Rownie gotten himself involved in?

Goblin Secrets was the 2012 National Book Award Winner for Young People’s Literature, so of course it’s a great read. It’s got adventure, mystery, and magic. Even though it’s classified in my library as a “Juvenile” book and  marketed toward readers aged 8-12, this book deals with a lot of big topics. Rownie learns about family, home, and finding where you belong.

In Zombay, everything you know about the world is turned on its head. Acting is illegal, goblins exist, and masks come to life. I liked that the book was structured like a play, with acts and scenes rather than chapters, which fit wonderfully with the importance of theatre. The book never talks down to its readers, and instead, you discover as you go.